The first group of Ponca pass through the towns of Crete, Wilber, and DeWitt. 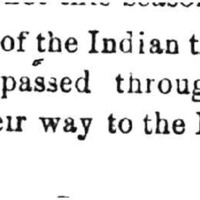